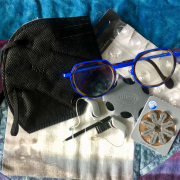 Hearing loss is one of the myriad ways I’m beginning to align with my mother.

For years, my mother had life-disrupting tinnitus, until she became completely deaf in one ear and critically impaired in the other. (Or maybe she became deaf and thus the tinnitus.) She avoided places where there was noise, it made her head roar. Noise was everywhere. She wore noise canceling headphones—the kind airport employees wear on the tarmac—in the shower, out in public, in the kitchen. She stopped listening to music. I always wondered if the headphones were counterproductive, trapping the sound in her head, like putting a conch shell to your ear. I never asked, I just trusted she was doing what helped mitigate it for her. I lived far away then, and was less tempted to try to “fix her.”

By the time I came to live with her, deaf in her right ear and without the hearing aid in her left ear, she heard nearly nothing, neither external nor internal. At least she no longer talked about the internal if she did, and she would have.

I marked the last year of my sixties with my own set of hearing aids. I had been asking certain people to repeat what they said to me often enough that it annoyed them. I put it off for a long time. I’m not sure why, really; mostly inertia. The expense. Then Covid. There is stigma attached to hearing aids, though it didn’t bother me what other people thought. I’ve worn glasses since my early twenties, why are hearing aids different? Except they are. People start losing vision at any age, but hearing loss seems mostly relegated to the aging. Maybe I didn’t want to acknowledge to myself that I was moving from middle age to late age.

I finally took the plunge and went for a test. My doctor referred me to the same Ear, Nose, Throat practice thirty miles from home that I had taken my mother to so many times; I felt myself starting down her path. “Do you hear ringing or roaring?” both the audiologist and the doctor asked. “Not really,” I said. “Maybe a little when it’s really quiet,”—giving credence to my doubt that my mother’s response to tinnitus was to do everything in her power to cancel all noise.

The good news is, the hearing loss is mild, and—unlike my mother’s—equal between ears, consistent with normal aging. As I suspected, I have lost the upper pitches, which is pretty much how typical hearing loss happens. The bad news is, I still can’t hear the people I couldn’t hear before. I’m beginning to have more sympathy for my mother. Don’t mumble, don’t talk to me with your back turned, it’s not volume so much as enunciation, adjust to what you know I need. Care.

The other bad news is, I hate them. I can’t tuck my hair behind my ears, the space is already occupied. The helix of my ears are working hard for me. (I had to look that part of the ear up.) I can’t figure out which fashion accessory to attach first: glasses, aids, or mask. I have to be careful when I remove my mask that the aid doesn’t fall out. In yoga, the first time I wore them, my mask kept falling off. I spent more time putting it back over my ear, and putting the hearing aid back, than I did in downward facing dog. Which was no great loss.

And the battery dies at inopportune times. The audiologist failed to mention that the cool app on my phone, where I can change the volume and check the battery life, is not reliable for replaceable battery aids, only for the rechargeable ones. And the little doodad that picks up the sound fills with wax, and I can’t hear until I replace it, regardless of battery life. It fills with wax because I hardly ever go out, and I don’t wear them at home. My ears continue to recognize them as foreign objects and protect themselves with wax. As soon as I’m home on the rare outing, I take them out—like taking off a certain female undergarment. It’s all super annoying.

But back to the tinnitus. I’ve started hearing birds twittering. Birds, I thought, how nice! And then I realized I was hearing birds all, the, time. Inside the house, with the windows closed. Uh oh, I thought, I bet it’s tinnitus. I checked WebMD, my favorite go-to for health questions. Symptoms include hearing ringing, buzzing, roaring, hissing, or whistling. Nothing about twittering. I guess one could do worse than hear birds. It’s starting to get really irritating though, mostly because how do I know when it really is birds?

I read of something that might help temporarily diminish the noise: Place the palms of your hands over your ears with fingers resting gently on the back of your head. Your middle fingers should point toward one another just above the base of your skull. Place your index fingers on top of your middle fingers and snap them (the index fingers) onto the skull making a loud, drumming noise. Repeat 40-50 times. Repeat several times a day for as long as necessary to reduce tinnitus.

A test drive of the technique might have helped. Or maybe it was just that the headache it gave me was distracting.

I’ve had the darn things for almost a year now. I still hate them. I’m not ready to stop wearing my mask (and perhaps I should have gotten around the head ones, rather than ear loops), but when I am, maybe that will help. There’s still the hair behind the ears thing though. Someday I will cut it short; the aids are here to stay. Meanwhile, hears [sic] to the birds. Or is it spring peepers I hear now? 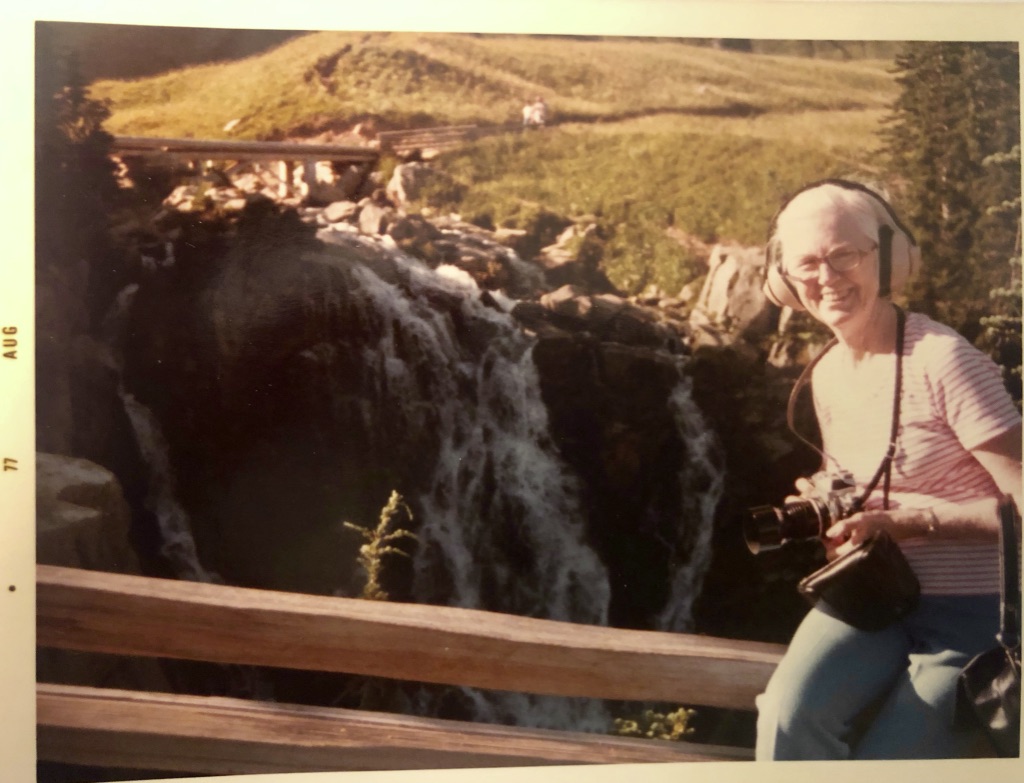