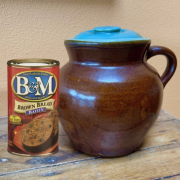 We pass on what we know. From one generation to the other, we want to share the best of what we knew growing up.

Every Saturday when I was a child my mother made Boston baked beans, the recipe on page 427 of the tattered 1945 seventh edition Fannie Farmer Boston Cooking School Cookbook that is still on the shelf in her kitchen that is now my kitchen. I can still smell them on slow bake in the oven in the brown bean pot with turquoise glaze inside, the molasses, apples, and bacon filling the house for hours. Along with beans, she always served Boston Brown Bread that came in a can, B&M brand. The can was opened at both both ends and the moist bread slid out and sliced into rounds along the indentations formed by the tin can, served with a generous slathering of cream cheese.

We ate that meal on the floor in front of the fireplace, sitting on the worn and faded pale blue and white plaid “school blanket,” so named because it was my older sister’s nap blanket when she was in kindergarten. All kinds of wonderings come up now, questioning my memory of this tradition. I suppose that’s how it always is as we age and come to know our family members as adults. Did my mother really let us eat in the living room? It seems an unlikely meal to eat on the floor. Every Saturday? I never asked her to confirm, and I’ve never asked my older sister who has more accurate memory from her childhood vantage point of the elder sister. I don’t want to know. I want to keep this story.

I made the beans a few times for church potlucks back in the day (infinitely better than canned pork ‘n’ beans); and I found a recipe for brown bread that I still make every year for New Year’s Day snack supper. It’s delicious with cream cheese, but I love it with sandwich-sliced bread and butter pickles and soft cheese, like Gouda or Havarti. It’s not Boston, which can be homemade in a can and steamed and sounds like way too much work, but it reminds me of childhood and my mother.

Heat oven to 350º. Grease 2-quart casserole generously and sprinkle with 1 T oats. (A round casserole is nice. I used a Pyrex one until I broke it, now I use my mother’s that matches the bean pot! But a bundt pan works too.)

Mix flour, ½ cup of oats, baking soda, salt, and cinnamon. Stir in buttermilk and molasses just until dry ingredients are moistened; pour into casserole. Sprinkle with 1 T oats. Bake until a wooden pick inserted in the center comes out clean, about 1 hour. Cool completely.

(This recipe and the beans from my mother’s 1945 Fannie Farmer Cooking School Cookbook can be found in the 25th edition of Story Circle Network’s Kitchen Table Stories 2022: Sharing Our Lives in Food.)