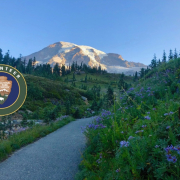 I became a gardener when I bought a house in Raleigh, on my own, and restored the old garden. Up until then, I merely did yard work. I was fifty-five.

I considered myself a writer when I started my first blog and shared it publicly. Before that I was just a journaler. I was fifty-eight.

I called my self a hiker when I returned to the Pacific Northwest and purchased boots and trekking poles and began being brave: solo hiking on steep and sometimes narrow mountain trails. Before that I was only a walker. I was sixty.

And now, I am growing edible food in raised beds I built inside a deer enclosure I built mostly by myself. I take nearly weekly hikes every spring, summer, and fall. And I’m soon officially to be an author. Next week I turn the page to seventy.

My friend Christina read a report that women are most productive in their sixties. Second in line is the decade of their seventies. Third is the fifties. My mother said her favorite decade was her eighties. I don’t know how “productivity” was defined in the study (I’m pretty damned proud of the two children I raised in my thirties and forties), but personal fulfillment definitely gets a nod to the sixties—including, I can say now that it’s in the rearview mirror, caring for my mother the first half of the decade—and I’m intoxicated by this next gateway. There are good years ahead, Goddess willing and the creeks don’t rise.

As I approach my decade birthday next week, I’ve been planning my celebratory summer, which will culminate with the publication of my memoir in October—and the huge learning curve of promoting it. I set a goal to hike seventy miles, but I’m already at 32, so I’ve changed it to 101—one for each summer of my mother’s amazing life—including at least seven new trails. Now I have a true challenge. (I may even have to hike in the rain, if the PNW doesn’t turn itself around.) And I’ve just completed the reveal of my carefully-guarded Secret Big Thing.

So here it is:

One of my (few) life regrets is that I didn’t spend a college summer working at a national park.  Yesterday—serendipitously on the 106th anniversary of my mother’s birth—I did the first training step toward being a volunteer Meadow Rover at Paradise in Mt. Rainier National Park. On-the-trail orientation is July 25—hopefully the snow will be gone by then. I will wear a uniform shirt with a name tag and insignia, and carry a walkie-talkie (!); and, I learned yesterday, a clicker to record visitor contacts! (Laughing.) I will hike the trails, being friendly to the Park’s many visitors from all over the country and the world (did you know MRNP is the fifth oldest national park in the country?), educating them on best practices, answering questions, offering information, preventing emergencies, and calling for help if they happen. It’s a departure from my avoidance of crowded trails and my preference for silent hiking. But hey, I’m seventy! It’s time to stretch.

A long-time Meadow Rover recently retired; she was in her nineties. I’m off on a Big New Adventure. Who knows how far it can go. There’s no expiration date on a dream.

My mother was born the same year the National Park Service was born. Happy birthday, Mama. I hope you are proud. I am.