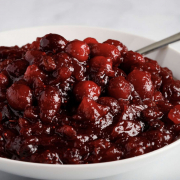 Mama kind of liked this cranberry sauce alternative. She couldn’t digest whole cranberry sauce—or at least imagined that she couldn’t, and she understandably was not going to chance it—so I always offered the canned cranberry jelly she had been eating on holidays for years. But yuck. Chutney cooks down to something between whole sauce and jelly, and eventually she stopped eating the canned stuff. But there’s a bigger story than that.

Many years ago, on my first Christmas that my children were spending with their stepfamily, too sad to be home alone without them, I drove out to the Atlantic coast for the day. Though I did it on a couple occasions after that year, it was only that first time I found a seafood restaurant that wasn’t exclusively serving a buffet of a traditional Christmas feast. The traditional meal without family made me sad! I wanted different.

I ordered salmon, served with cranberry chutney. It was delicious! I asked the wait staff if it would be possible to get the recipe. Now I could have Googled it and found something close, but in the early nineties that wasn’t so much an option. A few minutes later, the chef came out and sat down at my table and told me how to make it! Of course, there wasn’t really a recipe, just the ingredients. I went home and experimented until I got it right. It’s been a holiday specialty ever since.

Combine all ingredients in saucepan and boil down, about 30 minutes. Don’t overcook. Chutney will thicken as it cools.

* It’s hard to cover cranberries with water—they float. Be conservative. Try one cup.